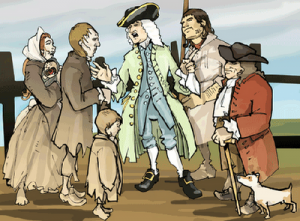 So Honors keeps sending messages about this thing called the commons because there will be a talk Thursday, November 8th at 8pm in LSB 001, but what ARE the commons?
One answer comes from history and the enclosure movement which was a land grab by the moneyed class that denied predominantly rural citizens the rights to public lands–or, the commons:

A significant precursor to the Industrial Revolution was the end of the so-called “open field system” during the Enclosure Movement in England during the 18th Century. Many families lost their traditional holdings and ultimately drifted into the growing industrial cities in search of work.

Further answers are available at a very popular location within the rubric which we call the commons–Wikipedia. Here you will find the wisdom and editing labors of a collective of commoners among them author, George Orwell (of 1984 and Animal Farm fame):

Stop to consider how the so-called owners of the land got hold of it. They simply seized it by force, afterwards hiring lawyers to provide them with title-deeds. In the case of the enclosure of the common lands, which was going on from about 1600 to 1850, the land-grabbers did not even have the excuse of being foreign conquerors; they were quite frankly taking the heritage of their own countrymen, upon no sort of pretext except that they had the power to do so.
—George Orwell, As I Please, Tribune, 18 August 1944