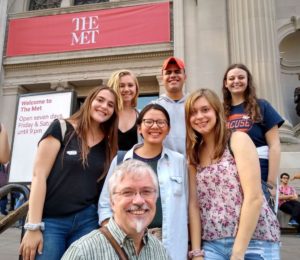 The HNR 340 class, Writing Scripture Law, visited the Metropolitan Museum of Art in New York City on September 28th. The class had studied the invention of writing in ancient Sumer and Egypt with Prof. Jim Watts from the Religion Department and were therefore very interested in seeing the hieroglyphic and cuneiform inscriptions in the Egyptian and Mesopotamian galleries of the museum. Students then had to write papers comparing one ancient written artifact in the MET with a written text in use on the SU campus. The trip also prompted them to think about the difference between art and writing in the context of ancient cultures and a modern museum of art, and how both often treat writing as art. This experience provided food for thought for the rest of the semester, as the class considered the impact of writing on religion, economics, bureaucracy, and law.