Honors Alum, Alexander Weiss (ECS ’12), Reflects on the Influence of an Honors class 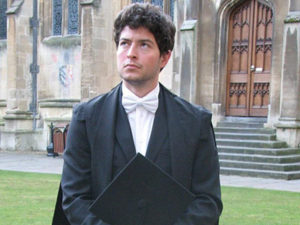 Alexander R. Weiss (ECS  ’12) has a library full of books and journals, from arcane treatises on science and engineering to timeless works of literature and philosophy.

One book he holds dear is The New York Times Bestseller “The Brain That Changes Itself” (Viking Press, 2007), by Norman Doidge, a Canadian psychiatrist and award-winning science writer.  Weiss credits an encounter with the author in the Honors Linked Lenses class for setting him on the path for scientific success.

“At Syracuse, I was part of The Renée Crown University Honors Program, which brought him to campus in 2009,” recalls Weiss, who earned a bachelor’s degree in bioengineering from the College of Engineering & Computer Science (ECS). “Dr. Doidge discussed how neuroplasticity is challenging the traditional, hard-wired model of the brain in favor of something more malleable.”

Imagine his surprise when, the day after the lecture, Doidge visited his classroom. Weiss was in Linked Lenses, a popular honors course co-taught by professors Cathryn Newton and Samuel Gorovitz. “Dr. Doidge signed my copy of his book, and sent me down the path I’m on now,” says Weiss, speaking by phone from Baltimore, where he is a postdoctoral research fellow in neuroengineering at Johns Hopkins University (JHU). “I still have that book, and often refer to it.”  Read more about this in SU news…