There is no typical Honors Thesis project – they are as unique as the students creating them and are all fine works of research, creative or professional work. The threshold for receiving a prize, then, is extraordinarily high, and the choice is always difficult. Each May, faculty committees meet, evaluate many wonderful projects, and determine prize recipients in five categories. The prizes are announced at the Honors Convocation Ceremony. 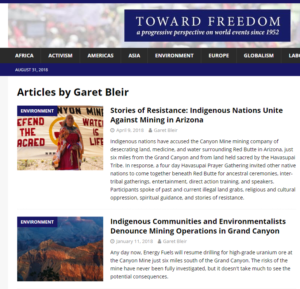 Garet’s magazine project, which includes long-form articles with video and photography published in Intercontinental Cry, an indigenous peoples’ magazine, and Toward Freedom, an analytical news publication, focuses on pending uranium ore extraction just outside Grand Canyon National Park. His work documents the ongoing and emerging efforts by local activists and legislators to safeguard an iconic American natural landscape and the cultural patrimony of indigenous stakeholders in the region. The documentary company, DOCUVISTA Filmproduktion has hired Garet as co-producer on a documentary based on this work to be aired on Germany’s national public-service television station.

The William Sauers Prize for Best Thesis Project in the Humanities 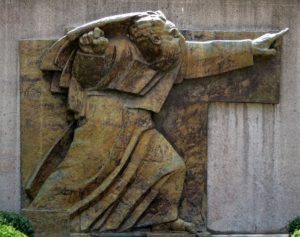 Tammy’s thesis work began just outside Bowne Hall, the home of the Honors and art history offices; she was inspired by the larger-than-life size Moses relief displayed in the Sculpture Garden. Her curiosity about the relief took her on a journey of archival research to reinterpret a cohesive narrative of the first attempt to create an American monument dedicated to the Holocaust in New York City. Her work reveals how the proposed but unbuilt Jewish Memorial and in particular, Ivan Meštrovic’s Moses, was entangled in a web of bureaucracy and patronage that exposed the challenges of creating a Jewish American identity in post-WWII America. 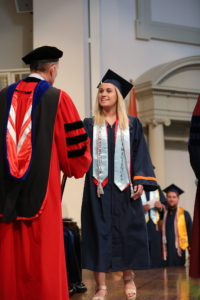 This project examines the history, politics, and memory of the March 1968 My Lai Massacre. Utilizing a wide range of primary and secondary sources, Dana examines official and popular reactions to the My Lai massacre and its role in the historical memory of the Vietnam War. The passing of the fiftieth anniversary of the massacre has inspired a wave of new works; Dana’s project analyzes how sentiments have changed over the past fifty years, how My Lai is viewed today, and why it is important that this massacre is remembered. 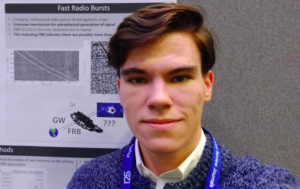 With the recent detection of gravitational waves, astronomy has entered a new age. For hundreds of years, we were limited in our understanding of the astrophysical processes of the universe by what we could observe with light. Greg’s physics work is in the subfield of radio astronomy, using radio waves to study these phenomena. The search for and study of fast radio bursts is one of the newest and most exciting topics in radio astronomy, and Greg’s Capstone presents both a project conducted at the Green Bank Observatory and a separate coincident search for gravitational wave counterparts to fast radio burst events. 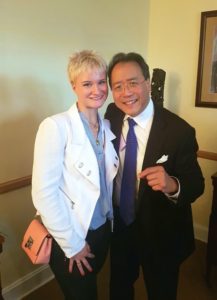 Dina-Marie Weineck, The College of Visual and Performing Arts, advised by Mark Nerenhausen

Diversification of Orchestras’ Audiences, Musicians, Programming, and Revenues: Transforming the Relevancy of German and U.S Orchestras to their Communities

Dina’s project, based on industry research and interviews with leaders of some of the world’s most renowned orchestras, presents ways orchestras in Germany and the U.S can transform classical music into a vehicle for social improvement through the diversification of audiences, artistic programming, and revenues. Dina’s work urges orchestras to manage their assets around community engagement that will lead to more sustainable funding models that both leverage and move far beyond the preservation of classical music.

Tarley’s Research Leads her to Hopkins for MPH