Most people look for ways to escape the heat in the summer. Honors student Rachel Bass (’16, A&S) had to embrace it. Rachel spent this past summer studying in Oman, on the southeastern corner of the Arabian Peninsula, where the temperature routinely climbs above 110 degrees. 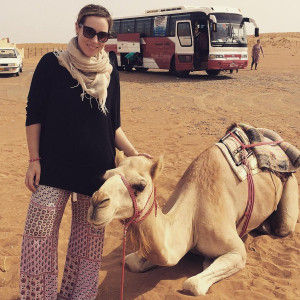 She was there on the Critical Language Scholarship sponsored by the United States Bureau of Educational and Cultural Affairs. Rachel discussed her award, her studies, and her travels in an interview via email:

What is your major/minor/concentration? What will your degree be?

I am an international relations major with a focus in Middle East/North Africa region and international political economy concentration, and a minor in Arabic.

I received the Critical Language Scholarship (CLS) for Arabic, which is a fully-funded summer language award sponsored by the US State Department’s Bureau of Educational and Cultural Affairs. Its purpose is to find bright young people (although there’s no age limit, as long as you’re enrolled in college/grad school) who want to study languages deemed critical to the US – pretty much only those spoken in Asia, Eastern Europe, the Middle East, and Africa. The award has no government service requirement; the State Department simply wants to foster intercultural understanding and also have a larger number of Americans going into the workforce (in any field) who have had those firsthand experiences and language skills.

What were your goals in applying and accepting the award?

I really wanted to be able to travel to an Arabic-speaking country to try to understand a culture so completely different from ours, and to become as fluent as possible. Unfortunately, Arabic is extraordinarily difficult, so my language skills moved from perhaps intermediate-low to intermediate-high. Arabic and a few other languages offered by CLS require students to have had at least a year of previous instruction.

I ended up in a small town in Oman, a super laid-back and peaceful country on the easternmost part of the Arabian peninsula, not far from the UAE. Our locations were chosen for us, but I was happy. I thought to myself, “who goes to Oman?!” 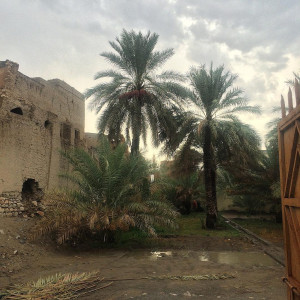 How long were you there?

From early June to early August 2015 – the program was about 8 weeks long.

What did you have to do to prepare?

Other than the paperwork, goals surveys and webinars, I did a lot of shopping for clothing that would be culturally appropriate but also comfortable in 115+ degree heat. There was also an oral proficiency interview beforehand, which was the first time I had ever spoken on the phone in Arabic, so that was terrifying (but wasn’t meant to be).

What were your living and studying situations?

There were 27 Americans at our location (there were also 2 sites in Jordan and 2 in Morocco), and we took up a couple of floors of an apartment building. Our schooling happened at an awesome little language institute called Noor Majan that taught Arabic and English. We had a homestay arrangement that was for 3 weekends, including the first weekend of Ramadan and the Eid al-Fitr holiday that concluded the holy month. The homestay was with our language partners’ families, and we got to celebrate Eid with them. It was incredible…

Is there one story, anecdote, scene, or moment that encapsulates your summer and would give the readers of the post a sense of what things were like for you there?

There are so many! Probably one of the craziest things was something that happened the night the head of the institute invited all of us over for Iftar dinner (where Muslims break their fast after sundown during Ramadan). The men and women ate in different guest rooms. After pigging out, the women had a henna party. It was sort of chaotic: 20 American women and at least 10 other Omani women and children in the same room. One of the Omani women was just starting to draw a henna design on my hands when I saw two of my friends gasp, glancing with a look of horror down the hallway near the outside door. Suddenly, I saw this dark shadowy thing moving at a lightning pace around the corner, right towards where I was sitting on the floor – it was a desert spider probably the size of large NYC sewer rat. All of the women and children flew up from their seats on the floor, screamed, and ran to the other corner of the room. My henna artist, however, calmly hurried outside, grabbed a sandal, and then returned to beat the life out of that demon thing near the bathroom. It was gory, but heroic. We all cheered, and then resumed our henna party.

What was your favorite part of the experience?

Aside from how much fun I had in class (I know, right?!) and with everyone in general, I loved the weird, desolate feeling Oman had in its non-coastal areas. It’s very mountainous and rocky, and very dusty. The sky is rarely clear blue. We visited the Wahiba Sands (I recommend looking them up, they’re famous) and had a little adventure on the outskirts of the Empty Quarter as well. I briefly lived in Southern California, and a lot of aspects of Oman reminded me of  the region, but it was also kind of like how I imagine it is to live on Mars. The heat was unreal, but I kind of miss it. Some of the first practical words we learned there were “air conditioner” and “nap”. I could go on forever…

You’re a senior, I believe? Are you working on a Capstone? Is your summer figuring in it? Have you worked out your plan for it?  Who’s your adviser?

Yes to being a senior! Nope, my summer was dedicated 100% to language study, so there wasn’t much energy left over for research. I have my plan in place, and myadvisor is Prof. Tom Perreault in the Geography department. My Capstone looks at international development assistance and gender-targeted projects in Jordan/Egypt and whether or not they improve women’s quality of life.

If you’d like to hear more, Rachel invites you to email her. Her address is robass@syr.edu

The Center for Fellowship & Scholarship Advising (CFSA) at Syracuse University offers support and guidance for students applying to CLS. http://nationalscholarships.syr.edu/ 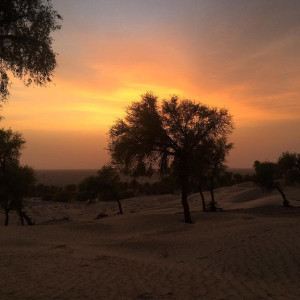