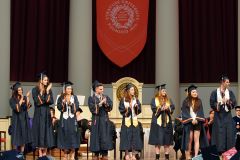 The typical Honors Thesis Project is an outstanding piece of scholarly work. The threshold for receiving a prize, however, is extraordinarily high, and the choice is always difficult. Committees made up of faculty met to evaluate many  outstanding projects, and determined prize recipients in five different categories: creative, humanities, social science, science & engineering, and professional. Prize recipients were announced at the Honors Convocation on May 10.  Congratulations to our 2019 Honors Thesis prize recipients!

A Performance of: “The Madness of Lady Bright”

Holly’s project is a performance of Lanford Wilson’s The Madness of Lady Bright, which first premiered in 1964 at the Caffe Cino, and is widely regarded as among the first works of the gay theater movement. Over the course of this one-act play, an aging drag queen slowly loses her mind in her New York apartment.
This production examines the themes of Wilson’s play through the lens of transgender identity, and an updated setting in the 1980s. This time period shapes the idea of the loneliness of not passing as a woman in a world where being visibly transgender meant rejection and danger.

Healthcare’s Responsibility to Care: The Call to Support both Patient’s and their Families Through Illness

Madeline’s project assesses the philosophy driving the relationship between the healthcare system and the family system. She argues for a philosophical shift in the approach to healthcare from a patient-centered care (PCC) that only focuses on the patient, to a patient-and-family centered care (PFCC). The PFCC approach is inclusive and takes into consideration the fact that a patient’s healing and the family’s emotional well-being are interdependent.

The Effects of Gender and Apology on Evaluations of Political Misconduct

Julia’s thesis examines how a politician’s gender and the issuance or lack of an apology affect voters’ evaluations of elected officials engrossed in a financial scandal. An experiment with 530 participants shows that politicians who apologize for financial misconduct are evaluated more favorably than politicians who do not apologize. However, women respondents believed female candidates who did not apologize were tougher and more assertive in politics. This finding may suggest a shift in women’s expectations of female candidate behavior.

Yona studied a protein (ubiquilin) that is linked to ALS, otherwise known as Lou Gehrig’s disease. This protein phase separates in solution at physiological temperature (akin to how oil and vinegar separate in salad dressing). The protein is mutated in a few cases of patients diagnosed with ALS. Together with others in the lab, Yona showed that some of these mutations changed the conditions required for phase separation, potentially shedding light on the mechanism of how these mutations could lead to ALS.

Yona’s project was also selected as the recipient of the David Orlin Prize for the single Outstanding Thesis Project of 2019.  Part of the findings of this project have been published in Structure, a high-impact peer-reviewed scientific journal in structural biology. She is the first undergraduate in the Castaneda lab to be a coauthor on a research publication.

The Future of the Renewable Fuel Standard

Jacob’s project examines the persistent uncertainty about the future of the Renewable Fuel Standard. He analyses the policy’s language and the varying degrees of political support for the program in the Senate. The study indicates that a Democratic Congress would implement legislation that focuses on the policy’s missed environmental goals. Conversely, a Republican Congress would lead to the most uncertainty in the market due to competing views of the RFS within the program.