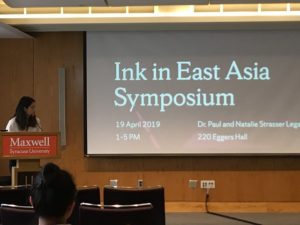 Tattoo Culture: Ink in East Asia is an interdisciplinary undergraduate collaboration between Cynthia Wang (Public Relations and International Relations, 2019) and Gabrielle Marzolf (Television, Radio and Film and Political Science, 2019). Their work examines the historical context of stigma surrounding tattoos in China and Japan by presenting ethnographic interviews the pair filmed with tattoo artists and other members of this epistemic community overseas. Their research culminates in a symposium and film screening of the documentary Brush & Needle, which was shot, directed and edited by Marzolf based on prior research and planning by Wang. (Cynthia Wang at podium, moderating symposium. Image by Karen Hall).