Thanks to Honors student Megan Phan, there are now 30,000 plus signatures urging the US to take action on uniting Mohammed Yousaf Yahapur, a refugee from Afghanistan living in Syracuse, with his wife and three small children still in Afghanistan.

Mohammed Yousaf Yahapur came to the US in 2013.  He fled Afghanistan because of death threats in response to his work with American journalists helping with arranging contacts and meeting and interpreting. His wife and children were not able to join him but he was assured that once he came to the US, it would be a routine matter for him to fill out the required paper work and the family would be approved to come.  Mohammed did fill out the appropriate paper work immediately after his arrival in the US. Unlike thousands of other similar refugee petitions that have been routinely approved during that time, his request has been met with unexplained inaction for three years.

His story moved Megan Phan, one of the Honors program participants working with Mohammed Yousaf to understand his story. She wrote a strongly persuasive petition to Change.org on his behalf as her class assignment in HNR 220 Refugee Communities in Syracuse.  The petition was posted on March 11, 2016.

The petition now has more than 30,000 signatures today and it will be used to help persuade New York State Senators Gillibrand and Schumer to end the delay in processing that is keeping this family separated.

You can view and sign the petition at Change.org. 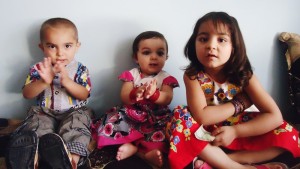