Syracuse University has been chosen for a pre-release screening of Suffragette, a powerful  drama about the foot soldiers of the early British feminist movement, women who were forced underground to pursue a dangerous game of cat and mouse with an increasingly brutal State. Academy Award nominees Carey Mulligan and Helena Bonham Carter, and three-time Academy Award winner Meryl Streep, lead the cast of this powerful film about the women who were willing to lose everything in their fight for equality as their civil disobedience escalates and sparks debate across early-20th-century England.  The film will be shown in HBC Gifford at 4:00 on Monday, October 26 and released in movie theaters the following week.

In conjunction with the film, an essay contest, “My Vision, My Voice” with a $1,000 scholarship prize is open to college students.  The essay length needs to be between 750 – 1,000 words.  The theme is “Your vision for women in America and/or around the world.”  Essays will be judged on inspiration/grandeur of the vision, on creativity of expression, and on proper grammar.  Submit your entry at http://suffragette-myvoice.com 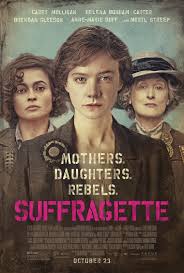