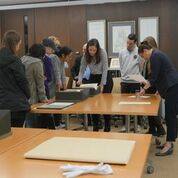 The title of Prof. Samuel Gorovitz’s class, “Beautiful Minds” (HNR 340) comes from Sylvia Nasar’s award-winning biography of Nobel Laureate John Nash. Given the context that Nash suffered from serious mental illness and spent much time as a psychiatric patient, Prof. Gorovitz and his class ask whether Nash’s mind would or should be considered a beautiful mind. Together, the members of the class explore their own answers to the question, “What is a beautiful mind?”

One step in their journey was a field trip to the Lemke Seminar Room in Special Collections at Bird Library. Curator Lucy Mulroney showed the students artifacts important to intellectual history, such as 4000 year old tablets with early writing, manuscripts reflecting the transition to a scientific age, works in literature and the visual arts, and even a leaf of a Gutenberg Bible.

During their visit, Andreacarola Urso (AS ’16), from Naples, Italy, mentioned that she had studied Latin, and with no prior notice she then read aloud an important passage from the work of Copernicus, and translated it into English. For this superb performance, she was awarded an Oscar. She did have to return the golden statue, as it is one of the library’s precious possessions. But she held it long enough to make a brief acceptance speech, and to allow the moment to be photographed. 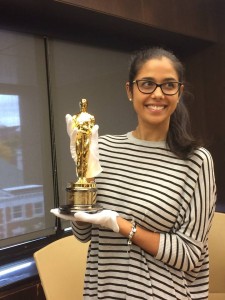