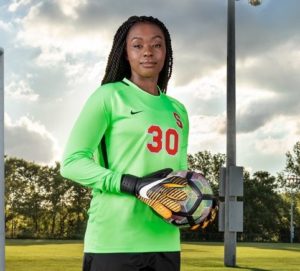 Honors alumna, Santita Ebangwese (ECS ’19), has been recognized for her  achievements as an outstanding student-athlete. If there is an accolade to be awarded, chances are she already has it. In four years at Syracuse, the list of her accomplishments on the court and in the classroom is long. And the biomedical engineering student isn’t finished.

Ebangwese has distinguished herself at Syracuse beyond even her own imagining. She is an All-American who helped the Orange to their first-ever NCAA Tournament appearance in volleyball, and in 2018 led the country in hitting percentage on the court. In June, Ebangwese learned that she is a nominee for the 2019 NCAA Woman of the Year Award, which honors women who have achieved excellence in academics, athletics and in their communities. Her achievements make her a serious contender. She was named a 2019 University Scholar, the highest undergraduate honor bestowed on a Syracuse University undergraduate,  a recipient of NCAA and ACC Postgraduate Scholarships, 2018 ACC Volleyball Scholar-Athlete of the Year and four-time ACC All-Academic Team selection.  Read more about this in Syracuse News #BeOrange