While we in Honors don’t have a red carpet, we do have many talented filmmakers in our midst…

The short film Crown-Wise Award winner Veronica Ortiz (Newhouse ’16) is making for her Capstone project has wrapped.  There’s a good deal of post-production work be be done, and after that the submission of her Capstone and then there’ll come submission to some film festivals. But the principle shooting is over.  To Veronica’s relief. 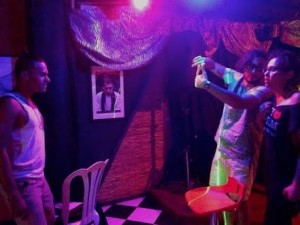 “Shooting this short film was the most challenging thing I’ve ever done in my college career,” Veronica said in an interview by email.  Which would explain why the best moment for her, as the writer and director, was when the shoot was over and she and her crew could celebrate a job well-done:

During [the filming of ] the last scene me and my co-director were competing to see who would get to yell “That’s a wrap!” first. In the end we ended up saying it at the same time and then we just ran out of the room we were holed up in and just celebrated with the rest of the crew. We were still yelling, “That’s a wrap!” repeatedly because we also wanted to be the last one to actually say it.

Veronica, a television, radio, and film major with a drama minor, describes the film, titled Y te sacarán los ojos (And You Will Wake Up With Fleas) as an exploration of “sexuality and agency in the Internet age.”

She thought that over and decided that maybe that isn’t a “controversial” enough way to describe it. She added, “It’s about a webcam showgirl that falls in love.”

Veronica has several short films to her credit. Two of them earned her a trip this past spring to the Sundance Film Festival as a winner of a Horizon Award for young female filmmakers. Of her Crown-Wise Award, Veronica, whose Capstone advisor is Professor Alex Mendez of the College of Visual and Performing Arts, said  she simply could not have carried out her film without it.

“I used the award to fund every part of my production, from catering for the crew to the film equipment rental. Thanks to that we were able to move past just doing another student film into creating a professional product.”

As challenging as the filming was, Veronica said that writing the script was an even bigger challenge.

“I worked on my original script for around five months, but I just wasn’t happy with the way it was turning out and I had lost my passion for the project. Once I decided to scrap that original script, and work on a new one, things just flowed a lot more naturally, for me as a director and for the production value.”

Asked her favorite scene in her finished film, Veronica was definite in her answer:

My favorite scene is the last one. I don’t want to spoil it, but the entirety of the short film was created around that key scene at the end. It was also a very intense and emotional scene that asked a lot from my actors. When we finally wrapped on that scene, my two lead actors and me just group-hugged for a long time – it was a very grueling and emotional process.”

For more about Veronica, her film work, and Y te sacaran los ojos visit her website.