Thursday, March 22, 5:00 PM – meet in front of Bowne Hall to ride in Honors van to the Dunbar Center.

You are cordially invited to join us on Thursday, March 22, from 5:00-8:00 p.m. Come engage in relaxing conversation, food, and entertainment with fellow Honors students and Honors professor, Mark D. Muhammad. A 5:30 p.m. reception, catered by students from the Syracuse City School District’s Culinary Arts program, will be followed by poetry, a performance, and a panel discussion on the Language, Life, and Legacy of Paul Laurence Dunbar, at the Dunbar Center.

Paul Laurence Dunbar was an American poet, novelist, and playwright of late 19th and early 20th centuries. In recognition of the 112th anniversary of Dunbar’s death and the 100th anniversary of the Dunbar Center’s founding in Syracuse, we will celebrate his life and explore the Center’s impact on the lives of local individuals. 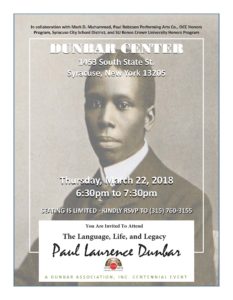