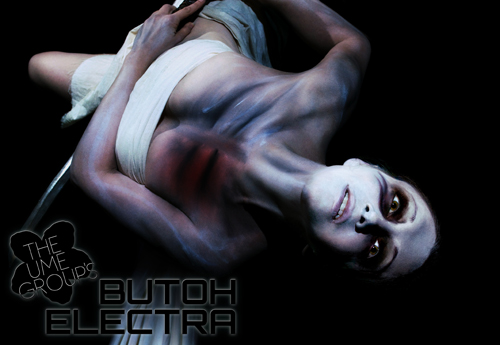 We write to you today to share some amazing work by an Honors Alumnus and an important fundraising campaign to help support his work! Jordan Rosin, Class of 2011, is the Creator and Producer of Butoh Electra, a physical theatre performance event that follows the story of Electra, from Greek mythology, whose inner life stood at odds with the world of the walking dead in which she lived.

Last year he and his team put on the show at FringeNYC and the show sold out every performance; being named a highlight of the entire Festival by a range of news outlets including The Village Voice! Now, this August, they have been invited to present Butoh Electra again! This time it will have a two-week run as part of the kick-off to the 2012-2013 season at the historic Irondale Center, an enormous and well-regarded multi-arts venue in the heart of the BAM Cultural District in Fort Greene, Brooklyn, NY. As the host, the Irondale Center is generously providing the production with:

However, that means the show’s creators are responsible for all of the other major costs associated with producing the show, including, but not limited to:

The cost of putting on the show will run just about $4,000 in all and this is where we are calling on the Honors Community to support your fellow student and Alum in his amazing, creative venture! With everyone’s help, they can make this production even bigger and better than the last and continue to build towards a more sustainable model of making theatre. So, would you like to support Jordan and the production? Perhaps you still have some questions? Jordan’s team has setup a Kickstarter.com page to make that easy! Just visit -> Kickstarter.com <- and you can choose to “BACK THIS PROJECT”, “Like” the project on Facebook, “Tweet” about it on Twitter, or otherwise share the word with your friends.  If you are a local to New York City, you’ll want to donate soon since the first 20 people to pledge $15 or more get a special code for discount tickets to the show!

We congratulate Jordan Rosin and his team for all of their hard work, hope you share in our excitement for them, and encourage you to show your support!