Gia Spicola (AS ’22) attended the National Conference on Race and Ethnicity in American Higher Education (NCORE) in Portland, OR. 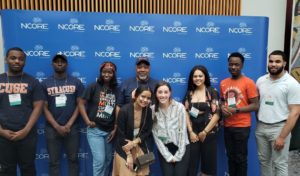 Speakers educated conference goers on the topics of racism, homelessness, and the increasing divide between the rich and the poor. Participants learned about Portland and other areas within the United States suffering through similar economic, social and political stress points.

For Gia, “Being able to attend a conference revolving only around Race and Ethnicity was enlightening. I was not aware of gentrification or major economic gap between the rich and poor in Portland, OR. I learned why the homeless rate was so high, and what could be done to lessen the numbers. Multiple professors, experts, and the keynote speaker were all so passionate and concerned for the city of Portland. During and after attending the conference I did research in to the area as to why it is the way it is today.”

There are many ways to become engaged. Find the one that fits you best!