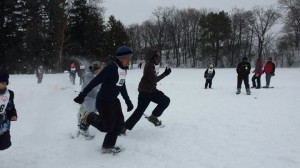 A group of SU students, alongside students from Le Moyne and Syracuse community members, volunteered at the New York State Winter Special Olympics held in various locations throughout the city. One such event was the SONY Snowshoe event held in Thornden Park. Here, volunteers were not only helping set up and digging the track out of the continuous snowfall but they also acted as “Fans in the Stands”. They made motivational signs and cheered for the athletes as they competed all day. The snow and the cold did not dampen their spirits a bit! At the end of the event several coaches expressed their appreciation for the volunteers who make this event so memorable for their athletes. “We are always telling our athletes that it’s not about winning or losing, it’s about having fun. The volunteers who gave their time to be here today were incredibly encouraging and helpful. They put smiles on all the athletes’ faces and that is more rewarding than any medal.”

Adrian Alvarez spent the day in Thorden Park and had this to say: “I now realize how dedicated some volunteers are in doing what they do; after all, it was incredibly cold that day but the volunteers were continuously cheering and giving high fives to the race participants: seemingly oblivious to the weather around them.” 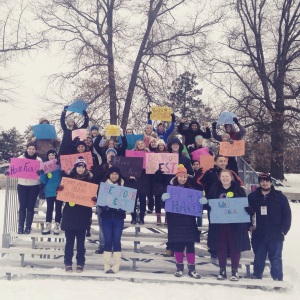