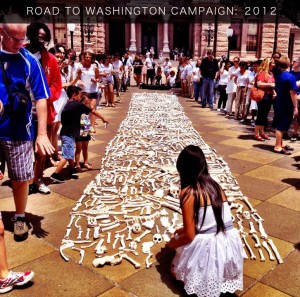 Are you one in a million?

CFAC Office Coordinator Yudaisy Fernadez is one of the million bringing awareness to genocide through the One Million Bones Campaign.

One Million Bones is a large-scale social arts initiative focused on bringing awareness to genocide in Somalia and the Democratic Republic of the Congo through the hands-on creation of clay and plaster bones, which will be brought to the National Mall in Washington, DC in June 2013. The One Million Bones display will serve as a visual petition against genocide and urge our politicians to act in favor of justice for the millions of genocide victims around the world.